A Blissfully Silent, but Powerful Heating System for JFK Library and Museum 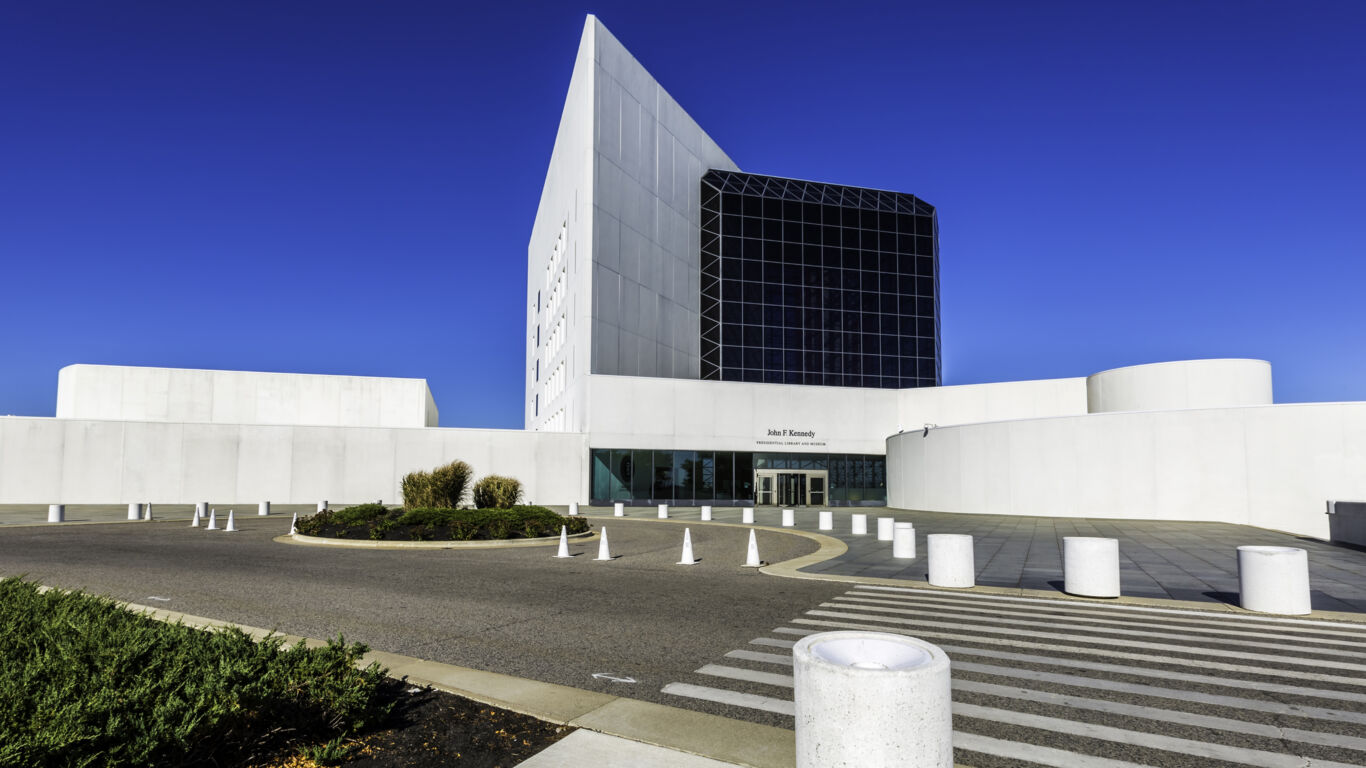 The John F. Kennedy Library and Museum is one of Boston's most revered architectural structures. The 135,000 square foot library/archive features a nine story, white precast concrete tower building, glass-enclosed pavilion and 18,000 square foot museum. Two 230-seat orientation theaters, the 20,000 square foot Stephen E. Smith Center and the adjoining library, are housed within. An electric heating plant was installed during initial construction in 1967. However, the sharply rising cost of electricity made heating the building increasingly expensive.

"When the library decided to overhaul the heating system in the fall of 2003, there were three major stipulations," said Justin Harder of Frazer Engineering, the project's primary contractor. "We wanted to utilize a gas-fired plant to take advantage of the lower price of natural gas. We wanted to install energy efficient condensing equipment. Because the mechanical room was located on the building's top floor, small, light units were a necessity. Three 2.0 million BTU/hr. AERCO Benchmark Boilers - with their modest 11 sq. ft. size, and condensing and modulating capabilities - offered the perfect solution."

By turning more of the boiler's fuel into usable heat, the Benchmark's ability to operate safely in condensing mode can increase the system's efficiency by as much as 11%-12%. When loop temperatures drop below 130°F, water vapor in the combustion gases is forced into a liquid state, releasing latent energy. The Benchmark's stainless steel heat exchanger is specifically constructed to withstand the corrosive impact of condensing operations and can withstand thermal shock, which is typically associated with cool return water temperatures.

"Because of the Benchmark's ability to operate safely in condensing mode, there was no need to install dedicated pumping equipment, auxiliary heat exchangers and mixing valves to protect the boilers," said Harder. "This simplified construction and will reduce operating and maintenance expenses for years to come."

"The modulating ability of the Benchmark boilers - in coordination with AERCO's Boiler Management System (BMS) - precisely matches the plant's output to the facility's changing demand," said Harder. "The AERCO BMS responds to the indoor/outdoor reset schedule driven by Siemen's building automation software. If the external temperature is 40°F then the BMS regulates the Benchmark units so that the boiler plant's feed temperature is 140°F. If the external temperature is 0°F, then the plant's supply temperature adjusts to 180°F. The AERCO BMS maximizes plant performance as a whole, modulating the output of the three boilers so that they run as one complete system."

The Benchmark's superior modulation makes this precise load-matching performance possible. With 20:1 turndown, each unit has the ability to run as little as 100,000 BTU/hr before cycling off and will increase output in precise 1% increments without unnecessary overshoot. The units perform more efficiently at lower loads, so by continually splitting output duty amongst all three boilers, the BMS ensures the highest efficiency from each unit. This results in less overall gas consumption by the plant. Running at part load, with return water temperatures below 130°F, the Benchmark units can exceed 95% thermal efficiency. The BMS also consistently rotates the lead boiler in the plant so that each unit receives approximately the same amount of work over the course of a season.

The push for efficiency influenced the choice of equipment outside the mechanical room as well. To complement the AERCO plant's modulating ability, variable frequency drive (VFD) pumps were installed to respond to changing flow conditions throughout the loop.

"Since we finished the project in October 2003, we haven't had a single day when the heating plant has had to run at 100%," said Harder. "And an added bonus of the AERCO units is their quiet acoustics. The jacket of water that surrounds the fire-tube design of the heat exchanger muffles the sound of combustion and the inlet-side blower makes for quiet forced air emissions. In a library, where a quiet atmosphere is essential, their silence is bliss."